“To take your chance in the thick of a rush, with firing all about,

Is nothing so bad when you’ve cover to ’and, an’ leave an’ likin’ to shout;

But to stand an’ be still to the Birken’ead drill is a damn tough bullet to chew,

An’ they done it, the Jollies—’Er Majesty’s Jollies—soldier an’ sailor too!

Their work was done when it ’adn’t begun; they was younger nor me an’ you;

Their choice it was plain between drownin’ in ’eaps an’ bein’ mopped by the screw,

So they stood an’ was still to the Birken’ead drill, soldier an’ sailor too!” 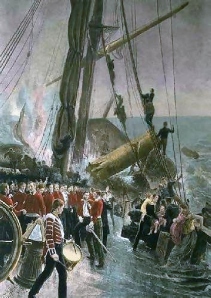 So they stood an’ was still to the Birken’ead drill, soldier an’ sailor too!

The “Birken’ead drill” Kipling mentioned is a metonym of the protocol for saving women and children first in life-threatening situations, and what it alludes to is the wreck of HM Troopship Birkenhead in 1852. Even as the ship’s three serviceable lifeboats scudded away with the women and children, Lt. Col. Alexander Seton of the 74th Regiment of Foot ordered the men still aboard to “stand fast” so as not to risk swamping the boats. The gallantry of the soldiers who “stood an’ was still” went on to be immortalized–and romanticized–in paintings and, of course, poems. On a historical note, Kipling may have been exercising a bit of poetic license when he wrote “Soldier an’ Sailor too,” as a good many more British Army soldiers (355) lost their lives in the wreck than did Royal Marines (14), the so-named “‘Er Majesty’s Jollies” about whom the poem was penned.

So, what exactly is “women and children first”? Well, first, let’s go over what it isn’t.  “Women and Children First” isn’t just a Van Halen album. Nor is it simply a Monty Python skit. It’s not a maritime law, nor is it even a hard and fast rule–definitely more of a guideline. And it’s certainly not, as some (ridiculous) feminists claim, “a logic of paternalistic treatment of women and children that purports to protect them but almost always also disempowers them and sometimes harms them.”

No. What it is is simply the logical extension of an evolutionary imperative, that of survival of the species. It is the mechanism by which the human superorganism ensures the survival of its gene pool in the event of catastrophe. Put simply, say the population of your village comprises 10 men and 10 women. Let’s go on to say that nine men are killed in a volcanic eruption. The surviving male could serially procreate with every woman in the village and, potentially, restore the population within a year. Now, if nine women are killed and eaten by hungry tigers, it will take nine times as long for a single female survivor to reproduce the village’s population back to pre-tiger levels. Conversely, men, very much like the sperm we like to spread around, are numerous, and every one of us–minus one–is expendable in the grand scheme of racial survival. Women, on the other hand, are absolutely critical to the propagation of the species. It isn’t some patriarchal conspiracy perpetrated by male-dominated society, but basic biology. Of all the different variables that shape human culture, none have been more influential than this, and, across all the societies that have formed since we learned how to walk upright, the expendability of men has been the only true constant.

We can afford to lose a few baby makers, at least until we’re presented with an extinction-level event

As someone who believes almost all of the world’s evils are a direct corollary of its human populating nearing or having already reached a kind of saturation point relative to its resources, it’s glaringly obvious to me that population recovery protocols like women and children first are no longer in our global interests. The aforementioned feminists got one thing right: women and children first is obsolete. Consider, as of today, the United States Census Bureau estimates the world’s population at 7.02 billion people. What this means is, even if some dire catastrophe were to kill 70 million people (that’s more than the populations of the world’s six largest cities proper combined), overall world population would only tick down a single percentage point. Against those kinds of numbers, I think it’s safe to say we’re at a point where we can afford to lose a few baby makers, and the babies they make, at least until such time that we’re presented with an actual extinction-level event. It is for this reason I propose we institute a more context-appropriate protocol, that of “Women and Children Last.”

Aside from the obvious Malthusian benefits, adoption of such a protocol would impart another not so obvious benefit: a general, global improvement in conversation. You see, one thing women and children share is that they both interact socially under the (false) assumption that other people are as interested in what they have to say as they are. Now, this isn’t to say that men don’t do this too, nor is it to say that women never have anything interesting to say at all. What I am saying is the psychologies of the women and children demographic just aren’t wired to even consider the possibility that where they find a subject interesting, any given interlocutor may not. This is largely a function of psychology and socialization.

If you know any women and children, then you’re already aware that they can, and often do, prattle on at length about things that not only are uninteresting, but very rarely make sense. In the case of children, the psychological basis is fairly clear-cut. Children between the ages of 2 and 7 undergo what is called the preoperational phase of the developmental stage, as posited by Swiss psychologist Jean Piaget in his theory of cognitive development. According to Piaget, the preoperational phase precedes the development of concrete logic in humans and is characterized by egocentrism. Specifically, preoperational children are not yet able to distinguish that the perceptions of others differ from their own. The game of peekaboo exemplifies the egocentrism of children as follows. When little Bobby covers his eyes, he can no longer see the world. Since he cannot imagine the world’s perspective as being separate from his, he concludes  the world cannot see either. The endgame of peekaboo amounts to “I can’t see you, so then you, obviously, can’t see me.” Similarly, if Bobby believes his macaroni art to be the most fascinating thing in the world, surely, everyone else must, too. I mean, why wouldn’t they? Egocentrism is further reinforced when Bobby’s doting parents engage in humoring him: “Wow, Bobby, your macaroni art sure is interesting. Now, wash up, it’s time for dinner.”

Something Piaget left out is that there is no actual evidence that everyone eventually grows out of this stage. One could argue that the lack of empathy–among other dysfunctions–in some adults indicates an arresting of cognitive development in the preoperative phase. But that is a rant for another day.

“Wow, Suzy, your work as a forensic accountant sure is interesting. Can we have sex, now?”

To continue, among women, regardless of whether they have progressed past the preoperational phase or not, this belief or illusion of universal interest (IUI) continues to receive reinforcement on into their adult lives. In examining a conversation between two women, it becomes evident that the participation of each is divided into two distinct stages. In the first stage, the receiver gives certain cues that convey they are as interested in the speaker’s words as the speaker herself. In actuality, she is simply waiting for the other to stop spewing her boring shit so she may initiate stage two, in which she begins spewing her own boring shit. This back and forth feigning of interest amounts to a verbal quid pro quo (“I’ll listen to your boring shit so that you’ll have to listen to me.”), but it also serves as a tacit reinforcement of universal interest. Interestingly enough, while a woman can fully recognize that not everything another says is interesting, she is completely incapable of recognizing the same in herself. Reinforcement of the illusion of universal interest continues even beyond a woman’s transition into adulthood, only instead of her parents providing it, it is men. You see, every guide to picking up girls that’s ever been published echoes, essentially, the same pointer: pretend you are interested in what she is saying. “Wow, Suzy, your work as a forensic accountant sure is interesting. Can we have sex, now?”

The socialization process for men, on the other hand, is a bit more jaded one. Men learn–either from trial and error or from dating manuals–that we can get sex as long as we consciously refrain from disabusing women of the delusion that everything they say is interesting. Numerous aspects of the socialization of men allow us to grasp that, while we find some things interesting, others may not. For example, conversations among men are not driven by the quid pro quo dynamic but, rather, by who can speak the loudest. Our role as pursuers of sex impresses upon even the thickest of us that we must be circumspect about what we say, and we do eventually learn that our interests may and oftentimes will not be shared. And that is one key difference between the sexes. Women simply do not receive the same cues, and, by virtue of their own gender role, no one will ever tell them how boring they are. The other key distinction is that foreknowledge alone is not enough to preclude men from being boring. It’s the same lingering adult egocentrism dynamic, except that it manifests in a more deliberate fashion. A man can know full well that what he says will bore the shit out of others, yet he will go on saying it anyway.

In conclusion, whatever the romantic ideals poets, painters and historians have ascribed to the brave men of HM Troopship Birkenhead, what really motivated those who “stood an’ was still” was not gallantry or chivalry, nor even survival of the species, but, simply, knowing that the prospect of drowning or succumbing to hypothermia and/or sharks was still preferable to the boring ass conversations to be had on a lifeboat full of women and children.